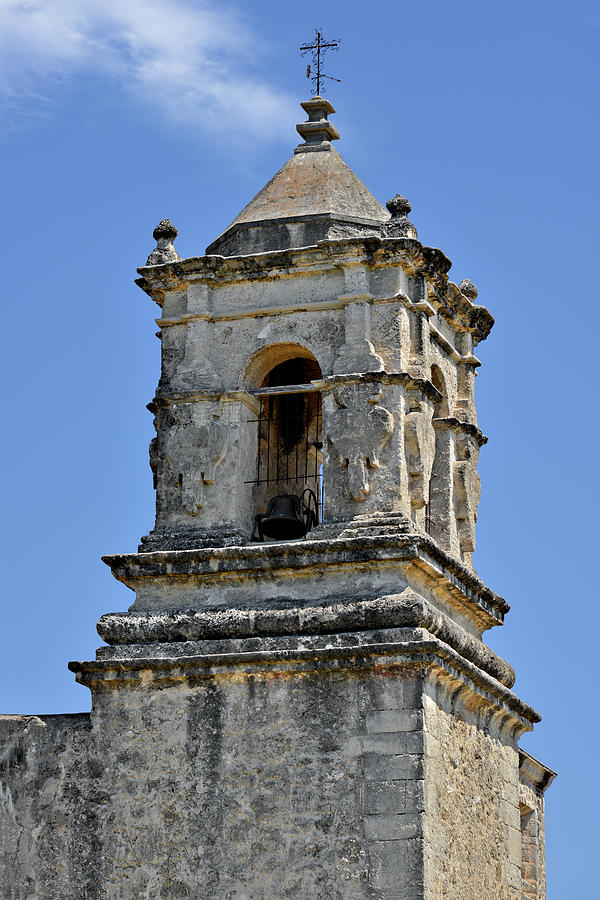 Bell Tower Mission San Jose TX is a photograph by Alexandra Till which was uploaded on July 29th, 2014.

© Christine Till
San José y San Miguel de Aguayo Mission, one of the five Spanish missions in San Antonio, Texas, was founded in the early eighteenth century. Numerous Indian groups were represented at San José. The mission was to acquaint the Indians with Christian teaching, European values, and vocational skills and to convert them to useful citizens of the empire.
In the summer of 1794 Governor Manuel Muńoz carried out the secularization of San José, a process whereby some of the mission holdings were distributed among proprietors. With the departure of the last Franciscan, Father José Antonio Díaz de Léon, in 1824, San José Mission was formally closed after more than a century of service. Beginning about 1813, troops were stationed intermittently at the mission. They caused considerable damage. The steps to the bell tower fell in 1903, and the tower itself tumbled down in 1928.

In 1932 major restoration was started on the mission structures. The church, which had lost its dome, bell tower, and a wall, was rededicated in 1937. The mission grounds were declared a national and state historical site in 1941, and on November 10, 1978, San José Mission became part of the San Antonio Missions National Historical Park.