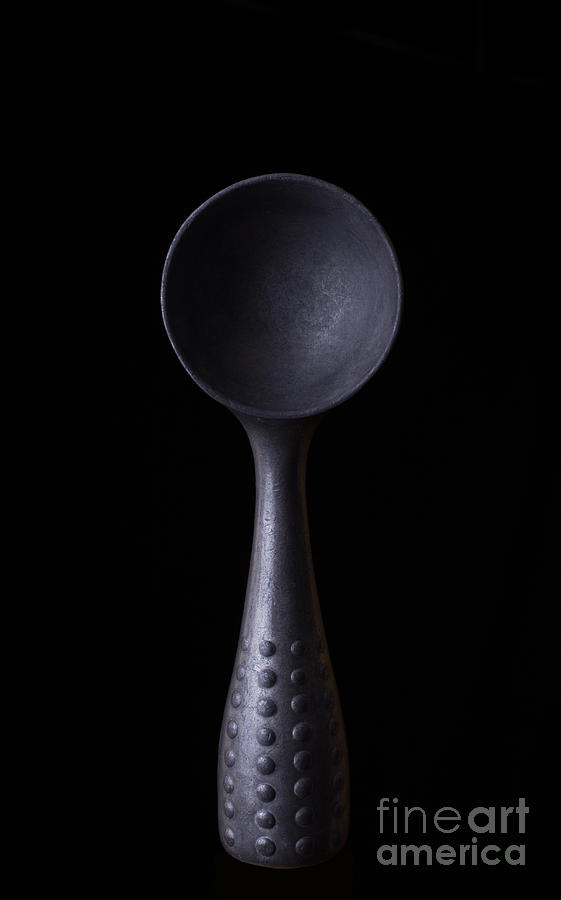 Vintage Ice Cream Scoop is a photograph by Edward Fielding which was uploaded on August 4th, 2014.

Close up of a vintage metal ice cream scoop. Fine art photography by Edward M. Fielding. www.edwardfielding.com
.....
Note: The watermark does not appear in the final print.
.....
The soda jerk's handiest tool was, at first, a tin-and-steel cone-shape gadget with a heart-shape key release. This, the first American ice cream scoop, was patented in 1876 by William Clewell of Reading and was manufactured by the Philadelphia-based V. Clad Co. at 123 S. 11th St., in time to serve the throngs who came to Philadelphia for the Centennial.

Ice cream was first produced commercially in America in 1851 by Jacob Fussell, a Baltimore milk dealer. By 1874, 59,000 gallons were consumed annually, most of it served in cone-shape dips on plates or in dishes. The ice cream cone was invented at the 1904 St. Louis World's Fair and instantly became popular.

It required two hands to operate early dippers - one on the handle, the other in turning the key to release the ice cream. In 1894, E.C. Baughman patented a one-handed scoop, manufactured by the Kingery Co. in Cincinnati. The soda jerk simply squeezed the handle and the ice cream was released from the scoop, leaving the other hand free to hold the dish. Before the turn of the century, there were 22 patents on ice cream scoops.