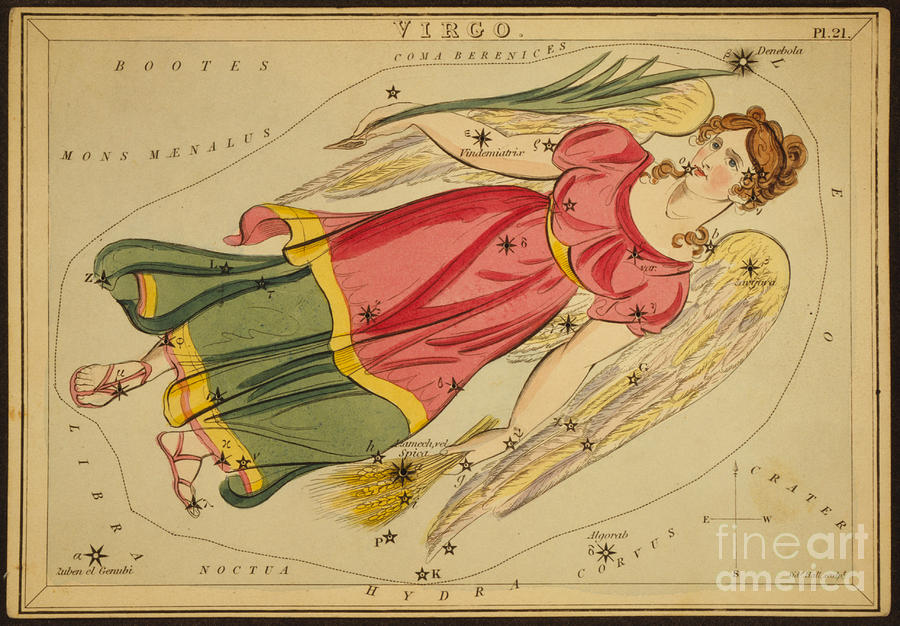 Virgo Constellation Zodiac Sign 1825 is a photograph by Science Source which was uploaded on June 16th, 2014.

Astronomical chart showing a winged virgin holding wheat in her left hand and a lily in her right hand forming the constellation. Virgo is one of the... more

Astronomical chart showing a winged virgin holding wheat in her left hand and a lily in her right hand forming the constellation. Virgo is one of the constellations of the zodiac. Its name is Latin for virgin. It was one of the 48 constellations listed by the 2nd century astronomer Ptolemy, and remains one of the 88 modern constellations defined by the International Astronomical Union. The Greeks and Romans associated Virgo with their goddess of wheat/agriculture, Demeter-Ceres. Alternatively, she was sometimes identified as the virgin goddess Iustitia or Astraea, holding the scales of justice in her hand as the constellation Libra. Virgo is often portrayed carrying two sheaves of wheat. Virgo is the sixth astrological sign in the Zodiac. It spans the 150-180th degree of the zodiac, between 152.75 and 180 degree of celestial longitude, which the Tropical zodiac the Sun transits this area on average between August 23 to September 22 each year. Urania's Mirror is a boxed set of 32 constellation cards first published by Samuel Leigh of the Strand, London, in or shortly before 1825. An unidentified lady, referred to by her nom-de-plume, Jehoshaphat Aspin, designed these whimsical astronomy cards. The engraver was Sidney Hall.